Hours of driving around searching for the dog proved fruitless, as did posting a notice on craigslist.com.

So Angelone, 31, enlisted the help of FindToto.com, a California company that for a fee places calls to residents in an area in which a pet has gone missing. Within an hour of Angelone's order, his neighbors received a recorded, 30-second message describing Maddy and asking anyone who had seen her to call Angelone.

In the end, Angelone found his dog, but not because of the calls. Maddy was taken to the Town Lake Animal Center a day after she disappeared, and a shelter staff member alerted Angelone.

But he said he doesn't regret the $125 that he spent on the calls. "I was doing anything in my power to get the word out," he said.

They have placed more than a million calls on behalf of thousands of clients and have reported finding more than 500 pets.

The first $125 gets pet owners 500 calls, which are exempt from the national do not call registry. For more money, pet owners can send out more calls. Bush said the company relies on a database maintained by the U.S. Postal Service and guarantees that 85 percent of the calls will be completed to a person or result in a message left on a machine. She said the company is the only one of its kind in the country and is seeking to patent its idea.

It takes about 15 minutes to make 500 calls, and that number is guaranteed to be placed within an hour of the order being taken online, Bush said.

"We consider ourselves kind of like the Amber Alert for missing pets," Bush said. "We are really hitting much harder and much faster than you can knocking on doors or hanging signs up."

According to their Web site, FindToto.com has had 16 clients in the Austin area. While some Austin-area pet owners who used the service have found their pets, none of those contacted by a reporter said it was directly because of a call placed to a neighbor.

Angelone said he learned about the service when a woman e-mailed him in response to a Craigslist ad and told him that she had used FindToto.com successfully.

Lori Graham, 24, turned to FindToto.com when she lost her Yorkshire terrier Maxwell in her Southwest Austin neighborhood in November.

"I found my dog the old-fashioned way," she said. "Someone saw a sign."

Her neighbor had scooped up Maxwell, taken him home and given him a bath.

"He even got to sleep in the bed with them," Graham said. "It was like a little doggie vacation."

The next morning, Graham's neighbor saw her signs and called about Maxwell.

Within hours, she received calls from neighbors saying that they had seen Bentley days earlier. In the end, he returned home on his own after apparently being hit by a car. Bentley is recovering from his injuries.

"He found me," Baughn said.

Riley Winebarger, 12, holds Winnie, one of the dogs that she pet-sits. Inspired by her sister's baby-sitting business, Riley started her animal-care service in her South Austin neighborhood.PHOTO by: Larry Kolvoord, AMERICAN-STATESMAN

Riley Winebarger, 12, lay on the grass in her South Austin front yard while a pug tore around her in circles. She was quiet and relaxed while the dog snorted and panted and pulled at the leash she was holding. A few steps away, her family's two rat terriers, Tater Tot and Cooper, stood quietly looking at her.

"She's our own neighborhood dog whisperer," said Helen Lemm, a psychotherapist who lives nearby.

Riley gets a call at least once a week from someone in her neighborhood near Zilker Park wanting her to pet-sit, said her mother, Susan Winebarger, a retired nurse who screens the calls.

The seventh-grader at O. Henry Middle School said she began her pet-sitting business two years ago because she wanted to earn her own money, but she was too young to take care of children as her big sister Erin, who has the baby-sitting and the car-detailing businesses, did.

Riley said she charges $5 to $10 a day for her pet-sitting services, but she usually gets more in tips.

A petite girl with a shy smile, Riley said she takes care of animals in only her neighborhood and fits her business into her other interests, such as working on a black belt in karate.

Riley said her business doesn't just include dogs and cats.

"I pet-sit a red-eared slider turtle named Scratchea that ran away from its pond," she said.

"I put treats all over the yard, and it came back four or five days later."

Riley once took care of a rat terrier named Chester that Lemm had rescued, Lemm said.

"He had been abused on the streets, and he was generally hypersensitive to people, but he could sense that Riley is an open-hearted, gentle little girl," Lemm said.

Patti Aleman, a nurse practitioner who lives across the street from Winebarger, said Riley charged only $5 a day to water plants, bring in the mail and feed Aleman's cat, Chloe, twice a day.

"You can't beat that," Aleman said.

Zilker Elementary School teacher Lindsey Gaddis, the owner of the pug — also named Cooper — said Riley was the first person she trusted to watch her dog.

"She's eager, and the first time I went over to her family's house to see if she would mind taking care of Cooper, I ended up staying for two hours," Gaddis said.

Riley said she was able to buy a video iPod this summer with money from her business and now has saved more than $100.

She has always loved animals, her mother said.

"She called me laughing once after she got bit by a boa constrictor at a birthday party," Winebarger said. 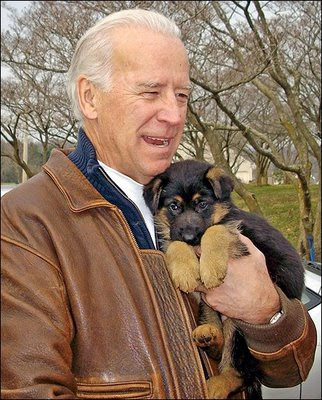 Vice President-elect Joe Biden holds the German shepherd puppy his family recently acquired from a breeder in Pennsylvania. His new dog comes from a pound.\ Photo courtesy The Brown Family/AP
Posted by Debi Martin No comments: 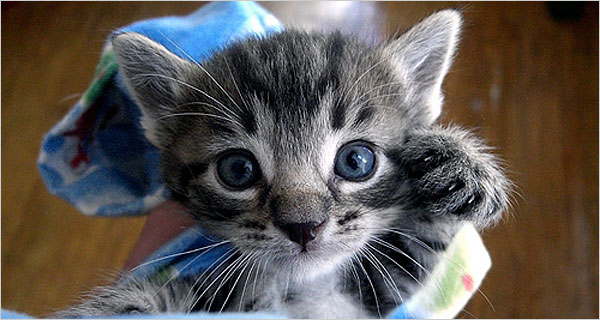 A kitten from Cute Overload.

CALENDARS and coffee table books filled with pictures of cute, cuddly kitties and sad-eyed puppies have been around for decades. So what explains the success of Cute Overload, a new page-a-day desk calendar that recently shot to the top of its category on Amazon.com and, more remarkably, to the upper ranks of the site’s overall best-sellers list?

Skip to next paragraph
Enlarge This Image 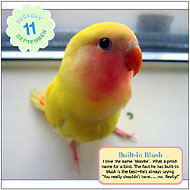 The awww-a-day calendar by Cute Overload sold out in a day on Amazon, which Meg Frost, the site’s founder, said “is totally ridiculous.” 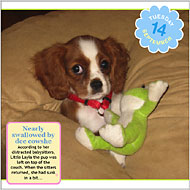 Another day in the awww-a-day calendar.

Stranger still, the birth of Cute Overload was almost purely accidental. Meg Frost, a 36-year-old design manager at Apple, started cuteoverload.com three years ago to test Web software. Within months, it became an online institution, drawing about 88,000 unique visitors a day — about the same as the political gossip blog Wonkette. BoingBoing linked to Cute Overload, saying that viewing the site “is like taking a happy pill.”

And in that warm feeling lies the reason for its popularity. Given all the nastiness on the Internet — blog trolls, flame wars, vicious gossip, pornography, snark and spam — what better antidote is there than looking at pictures of tiny ducklings waddling in a line or kittens splayed on their backs, paw pads in the air?

The most famous cute-animal Web sites are presented with a touch of self-mockery. The site I Can Has Cheezburger? (icanhascheezburger.com) features cat pictures with ungrammatical captions, Stuff on My Cat (stuffonmycat.com) displays photos of objects stacked on sleeping cats, and Kittenwars.com pits pairs of cat photos in a cuteness showdown.

Like those sites, Cute Overload is “cute, but not cutesy,” says Ms. Frost. “There’s definitely an edge.”

Ms. Frost has not given up her day job at Apple. “I actually love doing both, though it’s pretty crazy,” she said. Viewers send her about 100 submissions a day, and in doing so, grant her full republishing rights, she said. Ms. Frost is free to reuse the photos as she pleases. The calendar’s success may be just the beginning. She hints at other projects, possibly including a video channel.
Posted by Debi Martin No comments: