The history of Puppy Bowl by the numbers


(CNN) -- For the past decade, millions of Americans have passed on the biggest football game of the year to watch something way cuter. By now it's an established fact: Television doesn't get much more adorable than puppies.
"Puppy Bowl," Animal Planet's alternative programming to the NFL's Super Bowl, is the sublime result of pairing a bunch of wiggly puppies -- 66, in fact -- with squeaky toys and a mini-stadium set. Add a "rufferee" and a kitty-filled halftime, and every floppy tackle or slobbered-on football inspires an unintelligible burst of baby talk and giggles. That's the power of puppies!
Ahead of this year's most big game, we take a look at the Puppy Bowl, by the numbers.
10 -- Number of Puppy Bowls on Animal Planet, including this year. "Puppy Bowl X" premieres at 3 p.m. ET and PT February 2.
2 hours -- Official length of each year's "Puppy Bowl."
6 -- Times it's replayed on Super Bowl Sunday. It's not really a 12-hour show!
12.4 million -- Total number of Puppy Bowl IX viewers in 2013.

Watch blind puppy see for the first time
2.6 million -- Average number of viewers during "Puppy Bowl IX" in 2013.
1.1 million -- Average number of viewers during the blackout of Super Bowl XLVII in 2013.
5.58 million -- Viewers who watched "Puppy Bowl I" on February 6, 2005.
36 -- Puppies in Puppy Bowl X's starting lineup.
12-18 weeks -- Age range of the puppies in the starting lineup.
37 -- Adoption agencies and shelters that provided the puppy players.
12-15 -- Number of puppies on the "field" at a time. This is one of several good Puppy Bowl statistics we found from Ad Age.com.
19 x 10 feet -- Area of the Geico Puppy Bowl stadium.
30 -- Percent increase in ad revenue so far this year over last year's Puppy Bowl.
3 -- Guinea pigs watching from the "blimp."
30 -- Kittens performing a "domino topple" during the halftime show.
More than 34 million -- Views on YouTube of the "Original Keyboard Cat" that was first posted in 2007. A new version will be performing during Puppy Bowl X.
Almost 26,000 -- Meep the Bird's Twitter followers. As the social media correspondent for the Puppy Bowl, Meep will send out tweets during the game. Get it?!!
Almost 300,000 -- Tweets mentioning the Puppy Bowl IX Twitter users sent during its two-hour premiere in 2013.
49 -- Animal Planet crew members on the job during this year's bowl.
103 -- Total number of hours of footage shot for Puppy Bowl X.
1995 -- The year Dan FitzSimons created "The Puppy Channel," 24 hours of puppies. It has since moved online, atThePuppyChannel.com.


Be honest: Will you be watching the Super Bowl...or Puppy Bowl? Share your preference in the comments, on Twitter @CNNLiving or on CNN Living's Facebook page!

Yet another local Puppy Bowl... this one's 'sweet' 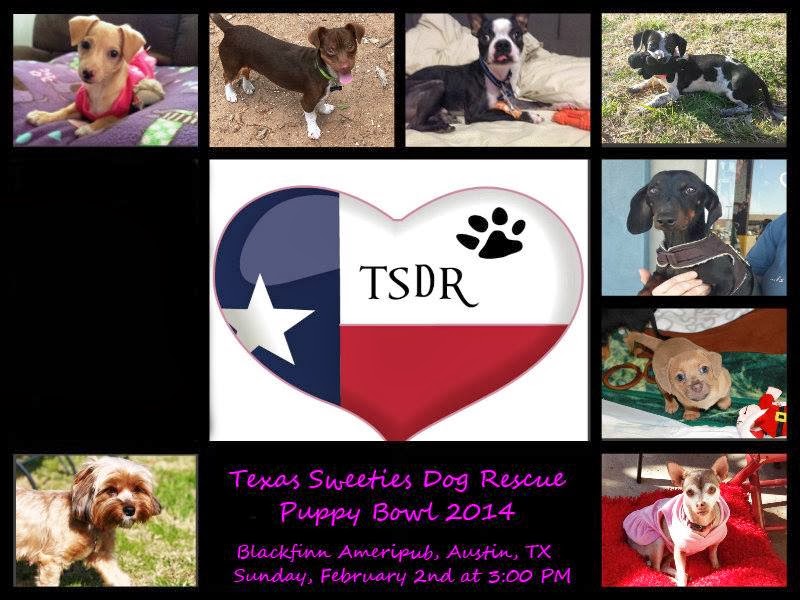 AUSTIN -- Who needs to watch the Puppy Bowl on television, when you can see one in person?
Starting at noon Saturday the "Denver Barkers" will take on the "Seattle Seadogs" in the Austin Humane Society's seventh annual Puppy Bowl.
The dogs will be in uniform to raise awareness of shelter adoptions, while "cheer cats" will be rooting for their favorite team, Kelly Hanes with AHS said.
Cats and kittens will be available for adoption for $10.
The adoption prices for dogs will vary, Hanes said.
AHS is located at 124 West Anderson Lane.
Posted by Debi Martin No comments: 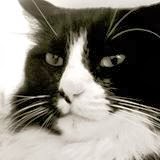 Hello all, thieving filmmaker here. As many of you know, I am from Seattle. Though Henri could not possibly care less, the Seahawks are in the Super Bowl today, and I will be somewhat occupied. In lieu of a carefully crafted Henri post, please accept this existential joke:
Jean-Paul Sartre is sitting at a French cafe, revising his draft of Being and Nothingness. He says to the waitress, “I’d like a cup of coffee, please, with no cream.”
The waitress replies, “I’m sorry, Monsieur, but we’re out of cream. How about with no milk?”
Posted by Debi Martin No comments:

I'll be switching channels back and forth tomorrow: Kitty versus Puppy Bowl? Which one to watch?? 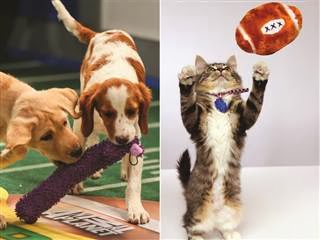 Forget the Seahawks versus the Broncos. There's another big showdown scheduled for Sunday, one that involves ferocious, snarling, amped-up ... and absolutely adorable four-legged furry friends. Yes, for the first time in game-day history, this year there will be both Puppy and Kitten Bowls.
Animal Planet's "Puppy Bowl"is back for its 10th year, while Hallmark Channel is introducing its first ever "Kitten Bowl." It's the purr-fect counter-programming for the little ones or adults who don't know a touchdown from a first down. But with both puppies and kittens huddling up viewers, who'll claw their way to a victory?
Let's take a look at their chances.

The meow mixLet's get the obvious out of the way: Both shows are going to feature kittens. "Puppy Bowl" has long boasted of its Kitten Halftime Show, where 13 baby felines romp, dash and chase their tails to viewers' delight. This year, the midpoint will also feature some famous faces of the feline world (though no Cat Daddy, Jackson Galaxy, as far as we know — a glaring omission), and a kitten who'll parachute onto the field. Like the human Super Bowl, "Puppy Bowl's" halftime festivities will also feature musical performances.
Meanwhile, "Kitten Bowl" will be all kittens, all the time. "We are exclusively kittens. We are invested in kittens. We are believers in kittens," Hallmark President and CEO Bill Abbott told TODAY. And not just 13. "We have 71 kittens," he pointed out. The four teams of cats will participate in two preliminary playoffs before facing off in a championship game. On top of that, some of the felines even have names perfectly suited to football, including MeowShawn Lynch and Tomcat Brady, Abbott said.
Point: When it comes to pure kitten power, we have to give this to "Kitten Bowl."

Players gotta playThere's one fundamental part of any gridiron face-off: Players have to play the game. And this is one category where Marjorie Kaplan, group president of Animal Planet, believes "Puppy Bowl" has the edge.
"Cats are different than dogs, and cats don't do what you tell them to do. They do what they want to do," Kaplan pointed out to TODAY. And it's true. How many cats have you met that were successfully trained to play fetch? Dogs are pretty much the winners when it comes to chasing down and catching balls.
But don't count out the cats. "Like the 'Puppy Bowl,' (the kittens) are just getting into trouble and chasing every little thing that they can find," Abbott said. "Toy mice and balls that are going through a maze, going through the goalposts and standing."
Point: We're curious about the cats, but we think this one's going to the dogs.

Star powerBoth events boast big names as part of the festivities. "Puppy Bowl's" halftime spectacular will feature the animal variety: Keyboard Cat will perform Bruno Mars' "Locked Out of Heaven," Internet sensation Lil Bub will check in, and police dogs will perform the National Anthem.
And heck, before kickoff, the pups even had a friend in high places lend them a hand.

But on game day, it's "Kitten Bowl" that'll bring in the two-legged celebs. Hosting the festivities will be Beth Stern, while the announcer will be Yankees' radio voice John Sterling. There will also be appearances by TODAY's Hoda Kotb, "Dancing With the Stars" bad boy Maksim Chmerkovskiy, Regis Philbin, Rachael Ray and many others.
Point: It's a close scrape, but the felines paw their way to the top of this category by having more actual celebs.
Rough (ruff!) housingFace it: Football is a tough sport, what with the tackles, pileups and more. And puppies? Well, they're just built for rambunctiousness. With more weight to throw around than their kitten counterparts and bigger teeth with which to chomp, the dogs will certainly be offering their own rough plays. Plus, the "Puppy Bowl" will have a wide range of body types in this full-contact pooch version of the game. Players include little Chihuahua mixes to Greyhounds to Labs to Boxers and beyond.
The kittens? They're all roughly the same size. But they've got a weapon the puppies don't have: sharp claws. "Wait 'til you see what happens on the 'Kitten Bowl,'" Stern teased during a Monday TODAY appearance. "There were a couple of cat fights." As anyone who's been on the wrong end of those claws knows, those little slicers can cause some serious damage. And judging by some teaser clips, the lithe felines are pretty darn good at flying tackles and tumbling too.
Point: It's a tie!

Game point: By a hair (and nose and some widdle whiskers) the kittens have it! Much as we love adorable puppies and can't wait to see their high jinks, it sounds like the cats might have a tiny edge in their first bowl game.

Which bowl game will you be watching Sunday?

But really, everyone who watches — and all of the feline and canine players — will be winners. Viewers are sure to be entertained, while the puppies and kittens get new homes, as both bowls are featuring shelter and rescue pets that are available for adoption.
"The kind of awareness for the shelters has been off the chart," Abbott told us. "We're going to do a lot of good with this. That's the best part."
"Puppy Bowl" starts at 3 p.m. Sunday on Animal Planet and runs in repeats well into the next morning. "Kitten Bowl" begins at noon Sunday on Hallmark Channel, with repeats ending at midnight.
— Additional reporting by Drusilla Moorhouse.