The Bull Creek District Park remains an on-leash park to prevent an increase of bacteria in the creek, which has been attributed to dog waste.

The Parks and Recreation Department as well as the Watershed Protection Department have searched for new off-leash locations. Yett Creek Park, near Parmer Lane and MoPac, is one option.

The two departments will work with an Off-Leash Area Advisory Committee to develop a public information strategy for surrounding neighborhoods. If the park is designated off-leash, a new parking facility and trail head would need to be constructed. The departments will meet with neighborhoods in May.

So-called puppy mills and other dog and cat breeding operations would become regulated by the state, required to undergo annual inspections and criminal background checks under a bill that could come before the full House next week.

Rep. Senfronia Thomson's House Bill 1451 would classify dog and cat breeders who have 11 or more unspayed female animals as commercial breeders and require that they be licensed by the state. In addition to background checks and annual inspections, operators would be required to provide wholesome food and clean water, proper lighting and ventilation for animals confined indoors and adequate sanitation.

Supporters said current laws address only extreme cases and make it difficult for animal welfare workers to investigate puppy mills, especially if the operators bar them from their property.

Thompson's bill enjoys the support the Humane Society of the United States and the American Society for the Prevention of Cruelty to Animals, but breeders say it would go too far. At a committee hearing last month, dozens of witnesses, many of them breeders, testified that the measure would put them out of business while doing nothing to shut down inhumane operations.

Other breeders criticized the 11-female limit, and some argued that the annual examination and record-keeping requirements would be too expensive.

Hobby breeders would be excluded from regulation.

Thompson, D-Houston, said Thursday that she has continued to work with opponents of the bill during the past couple of months and believes she has addressed their concerns.

"Show dogs, wildlife, herding dogs — it doesn't affect them at all," she said. "If you have 11 intact females, and you're breeding them all at the same time, then you need to be licensed by the state. It's like when somebody cuts hair for free. We don't bother them. But when they start charging for their services, we need to make sure for the sake of public health that they know what they're doing."

Gib Lewis, the former House speaker who testified against the bill on behalf of the Responsible Pet Owners Association, the Texas Wildlife Association and himself, labeled the bill "extremely bad policy." He said Thursday he was opposed to it in part because PETA and other animal rights groups were pushing similar bills in state legislatures across the country.

"License fees won't cover what they want done," he said. "Anybody raising hunting dogs, show dogs, even cats, it will put them out of business."

Thompson's bill was sailing through the House on Thursday until state Rep. David Simpson, a freshman Republican from Longview, objected to it being a part of the local and consent calendar, which Thompson chairs. He also objected to the substance of the measure.

"Look, I'm all for enforcing animal cruelty laws," he said. "But these licensing and regulation requirements affects the law-abiding when what we need to do is punish the wrongdoers."

He also disagreed with Thompson's contention that the bill would have no financial implications for the state.

This is George. Other than the required post-fire bath, he can't figure out what the fuss is all about.
Posted by Debi Martin No comments:

Dogs dressed up to look like Elvis? It must be Easter in Austin 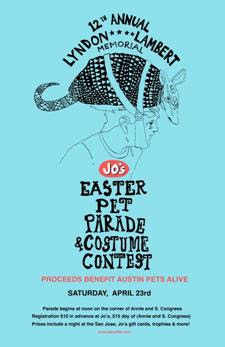 When & Where: The parade will kick-off at 12pm on Saturday, April 23 at the corner of Congress and Annie Street and end at Jo’s Coffee on 1300 South Congress.

What: Bring your finest pet costume, the judging will begin promptly after the parade and top awards for the best dressed pets include a night at the Hotel San Jose, Jo’s gift cards, trophies, and more!

Purrfect gift for that catty girlfriend... wedding present? They do come in PINK! 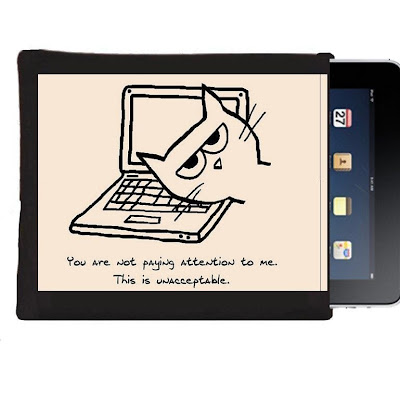 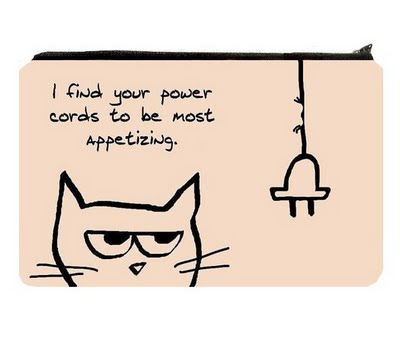 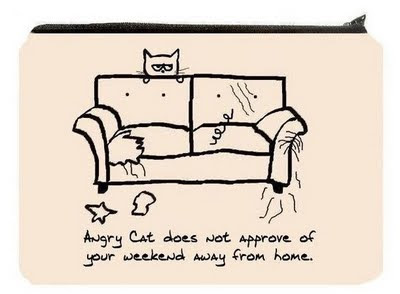 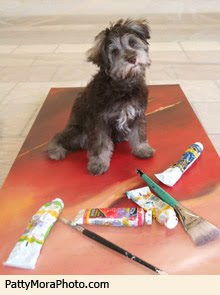 Petcasso is an annual fundraiser benefitting the Animal Trustees of Austin program for providing affordable health care to Austin Pets. Last year’s event brought in over $180,000 and featured some very intricate paintings by some very talented pets and their owners. This year promises to be just as exciting and will be auctioning off works by the most gifted pet artists in Austin.

The event this year will be held Sunday, April 17. It will include a lavish buffet style dinner, a silent and a live auction featuring paintings created by animal artists and their owners. Petcasso 2011 will be Animal Trustees' fifth annual animal art event raising critical funding for programs. Animal Trustees of Austin operates two veterinary clinics which provide quality and affordable health care for Austin's neediest animals, and free care for animals of the homeless.

from: Texas Humane Legislation Network
HB 1919 will allow anyone who kills or seriously injures a dog to claim a defense that he feared that the dog might cause him or someone else serious bodily harm. This is so vague that it will create "open season" on all dogs. We're not talking about dogs that have been declared dangerous; we're talking about all dogs.Also it will even include dogs that are on their own property and the person killing them was trespassing or even burglarizing the property.There is already a defense for all crimes referred to as the "defense of necessity" which protects people that have to take action necessary to the circumstances.To our knowledge, no person has been charged or unjustly prosecuted or convicted for killing or seriously injuring an animal that was attacking someone. This broadens it to allow the person to "reasonably fear" which cannot be proven one way or the other.
Posted by Debi Martin No comments:

We CAN just all learn to GET ALONG

A bill that sets out to regulate large-scale commercial breeders of cats and dogs is approaching a House vote. Several animal rights groups support it, but some breeders claim it’s too vague and unnecessarily restrictive.
from ynn.com
Posted by Debi Martin No comments: