Sally Lucker with husband Geoff, Cody the dog, and cats 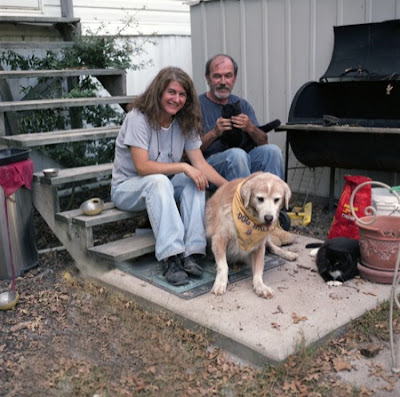 PHOTO BY SANDY CARSON
from: The Austin Chronicle
by: Amy Smith
Central Texas may have lost one of its most dedicated animal rescue volunteers, but Sally Lucker’s legacy continues through Blue Paws Rescue, a non-profit organization she founded. Sally was driving to her home in Lexington, northeast of Austin, during a flash flood March 20 when her car was swept off the road into Yegua Creek on FM 1624.
She was traveling with her beloved dog Starfish. Swollen, muddy waters slowed the search process until finally, on March 22, a dive team with the Texas Department of Public Safety recovered the bodies of Sally and her dog. A celebration of Sally’s life was held March 24.

Austin photographer and Chronicle contributor Sandy Carsonhad been working with Sally on a photo documentary he’s preparing on feral cat trapping. Sally would take the cats to Austin Humane Society for spay and neuter services, and one year her record was 600 cats, he said.

Tributes can be made on the Blue Paws Rescue group’s Facebook page, where a fund has been established in Sally’s memory.
Posted by Debi Martin No comments: Links to this post

In the spirit of Friday the 13th, on the night of Friday, April 13, the Central Texas SPCA will host a Masquerade Ball at the Mansion at Judges Hill to celebrate the organization’s 24thanniversary.

The Central Texas SPCA, is a privately-funded, no-kill animal shelter serving the Greater Austin area, has reached a milestone in its mission of finding forever families for homeless dogs and cats for more than 24 years.

The Masquerade Ball will be held from 6:00-10:00 p.m. on April 13 at the historic Mansion at Judges' Hill in downtown Austin. Attendees of this elegant event will enjoy dinner, a Pet Parade, live and silent auctions including donations from generous local vendors, and a Wag Your Tail fundraiser. Cocktail attire with a mask is suggested.

At the Ball, the Central Texas SPCA will honor State Representative Eddie Rodriguez as the 2012 Animal Advocate of the year for his work during the 2011 Texas Legislative Session to pass House Bill 1451 (the Puppy Mill law). Rep. Rodriguez also passed House Resolution 13, which recognized October 2011 as Adopt a Shelter Pet Month in Texas. All those who support animal rescue efforts are invited to join in celebrating the shelter and Rep. Rodriguez’s achievements.