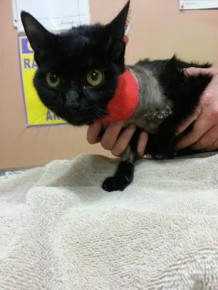 from: khou.com
AUSTIN -- Local shelter Austin Pets Alive! took in a black cat and her five kittens following a dog attack on Thursday.
APA! says the cat, Penelope, is eight months old. Her jaw was broken in the attack, and she will need additional jaw surgery to fully recover. Her front leg was amputated as a result of the attack.
The shelter is asking for donations to help with Penelope's care, which will cost $1,600. Go here to donate.
The shelter says Penelepe's kittens are in good health.
Posted by Debi Martin No comments:

Email ThisBlogThis!Share to TwitterShare to FacebookShare to Pinterest
Labels: APA! takes in cat and kittens after dog attack 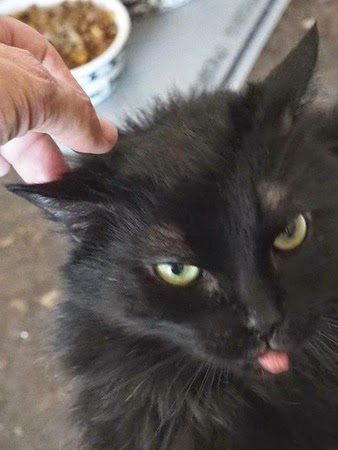 This week, Austin Pets Alive! is looking for a match for Furline, a beautiful black-haired kitty who likes attention, despite usually having a grumpy disposition. But this grumpy cat lets her humorous side, too, with playful moves like sticking out her tongue and it soon becomes clear as to why she would be a great addition to your family.
Name: Furline
Sex: Female
Breed: Domestic medium hair mix
Adult size: Medium
Age: 4 years, 3 months
Sign: Aquarius
Spayed/neutered: Yes
Declawed: No
Adoption donation: Furline's adoption fee is normally $75, but she is part of APA!'s Back in Black Promo so she has a "name your own price" adoption fee.
Location: On site
What APA! says about Furline:
Furline may seem shy and distant at first, but she just prefers that you come to her to give her a pet. She's not as playful as other cats, but she never says no to receiving attention and a nice scratch behind the ear.
Her best friend is Carmella — they were rescued together and spend plenty of time together now. If you want to adopt Furline, you may consider adopting a second kitty to keep this dynamic duo together.
With a proper introduction, Furline should adapt to other animals in the home.
Why APA! says she deserves your love:
Whether she's wearing a scowl or sticking out her tongue, Furline is a well-behaved and friendly cat looking for a laid-back family. As long as she's with her BFF, Carmella, she will be happy wherever she ends up.
To learn more and adopt Furline, visit the APA! website.
Posted by Debi Martin No comments:

by JADE MINGUS / KVUE News and Photojournalist MICHAEL MOORE
Bio | Email | Follow: @JadeM_KVUE
kvue.com
Posted on May 21, 2014 at 5:31 PM
PFLUGERVILLE -- Megan Crist says she noticed her dogs chewing on something in her backyard Monday and discovered the rat poison.
When she rushed her two dogs to the vet, they had to have injections to empty their stomachs. The long term effects are not known.
"Our dogs never bark. We can’t figure out why someone targeted our dogs," said Crist.
Crist's Cavalier King Charles Spaniel named Tubs and her service dog, an Australian Shepherd named Book, had eaten several cheese balls filled with rat poison in the backyard located in the Highland Park neighborhood near Heatherwilde Boulevard.
"When we got to the vet, we squished it and it's was literally like someone took Velveeta cheese and rat poison and mushed it together," said Crist.
Crist and her husband Adam are surprised someone would target their yard, especially since their daughter's toys are outside, showing a toddler lives there.
"I really hope it’s just some kids who thought they were having fun and didn’t realize what they were doing, and that they realize now it’s not a fun joke," said Adam Crist.
The Pflugerville Police Department is investigating. They say whoever is responsible could face animal cruelty charges.
Another neighbor tells KVUE a woman found more poisoned cheese near a walking trail Tuesday night.

AUSTIN -- “It's kind of like losing a kid."
That’s how KVUE Engineer John Schlueter describes his feelings after his 15-year-old dog Sadie died this month, after eating a treat he says eventually killed her.
Schlueter gave his dogs a Pur Luv bacon-flavored chew. But he says within a day of eating it, Sadie started getting sick.
"Spent all day throwing up on a Monday after we gave it to them on a Sunday.”
Sadie was rushed to the emergency clinic where an ultrasound revealed Sadie had a mass in her upper intestine blocking anything from getting passed it.
However by the time they scheduled surgery, he says it was too late.
"She was in toxic shock and wasn't going to survive the surgery, so we unhappily decided that she'd be better put down instead of dying in surgery,” said Schlueter.
When the veterinarian at Emergency Animal Hospital of Northwest Austin opened Sadie’s intestines during the necropsy, the vet tells KVUE they were surprised at what they found.
"They thought it was a piece of rubber but no, it's the center of this chew bone. It's the same color, same thing; it's exactly what it is,” said Schlueter, referring to the Pur Luv dog treat.
In 2013 a man in Chicago filed a class-action lawsuit against the makers of Pur Luv treats claiming the chews can leave indigestible “rock-hard chunks” inside a dog, injuring or killing it.
The chews are sold at most pet food retailers.
"It requires a lot of chewing to break it up, and if you have a dog that doesn't chew, then it becomes a foreign body like a pecan,” said Austin veterinarian Dr. Richard Mouser.
Mouser says he sees this problem a lot with all kind of dog treats, and suggests rolled rawhides not made in China.
"I only buy products that are made from American or Brazilian beef.”
On Wednesday, retailers Petco and PetSmart announced that by the end of the year it will no longer sell any treat made in China.
“The sourcing and supply chain issues are still very much real for a lot of these companies,” said Austin Biomedical Engineer and entrepreneur Michael Landa.
Landa created the line of dog food called Nulo, also sold at PetSmart, made of organic ingredients.
"We have the highest meat content of any dog or cat food on the market in the United States,” said Landa. "We take a lot of pride and a lot of care looking at the sourcing all the way down to the source."
He wants to make sure owners like Schlueter won’t have to worry about what will happen next time they feed or reward their pets.

Email ThisBlogThis!Share to TwitterShare to FacebookShare to Pinterest
Labels: Austin man says a pet treat killed his dog, dog treats made in China

Whats Not To Like: Wine, manicure and animal welfare 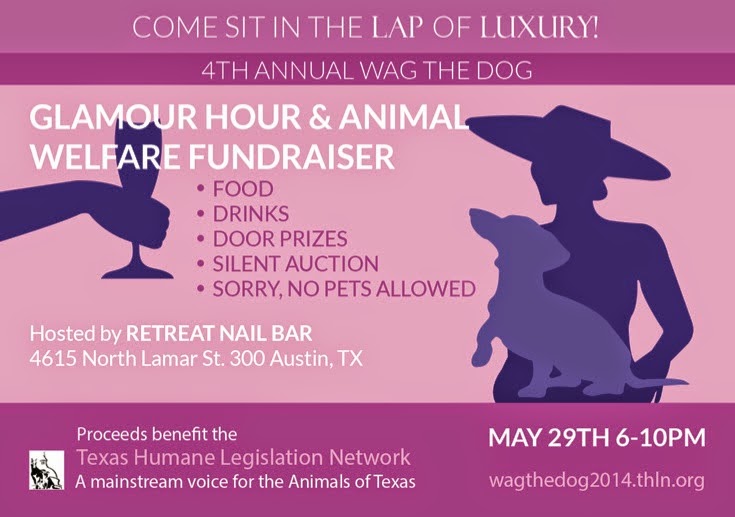 In the Republican Primary Runoff for Texas Attorney General, the two candidates are Representative Dan Branch from Dallas and Senator Ken Paxton from McKinney. The Texas Attorney General race is one of special importance to animal advocates since that office is responsible for interpreting and in some instances enforcing the animal welfare laws of Texas. For example, in 2002 it was then Attorney General John Cornyn who issued a landmark opinion confirming that Texas law prohibits the slaughter of horses for human consumption. Again in 2007, Attorney General Greg Abbott opined that it is illegal for foreign horse slaughter plants to transport their horsemeat through Texas. Thus, it is important to know the past voting records of these candidates on animal welfare issues.

Below are the records of both Branch and Paxton on important animal welfare bills.
Branch's Record

In 2007, Branch was the author of the Pet Evacuation Bill (HB 88) which requires that all companion and service animals be included in evacuation plans in the event of a natural disaster. Previously evacuees had to either abandon their pets or leave them at local emergency shelters during natural disasters.

In 2011, Branch co-authored the Puppy Mill Bill (HB 1451) which required commercial breeders of dogs and cats to be registered with and regulated by the Texas Department of Licensing and Regulation. It took two legislative sessions to pass this bill which was a major step in providing humane conditions and care for dogs and cats in breeding facilities.

In 2011, Branch voted for the Civil Seizure Bill (HB 963) which allows law enforcement and animal control officers to seize cruelly treated animals and remove them from their abusers.

PLEASE MAKE SURE YOU VOTE AND ENCOURAGE YOUR FRIENDS AND FAMILY TO DO THE SAME. 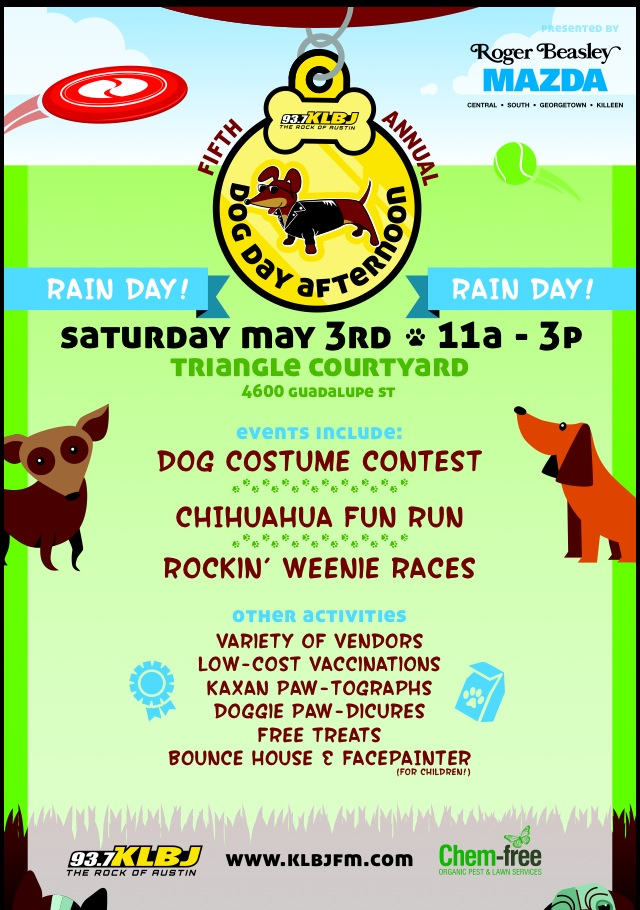 Email ThisBlogThis!Share to TwitterShare to FacebookShare to Pinterest
Labels: 5th Annual Dog Day Afternoon in Austin at the Triangle

Not news to Austin pet community: We spend a lot on pampering our pets 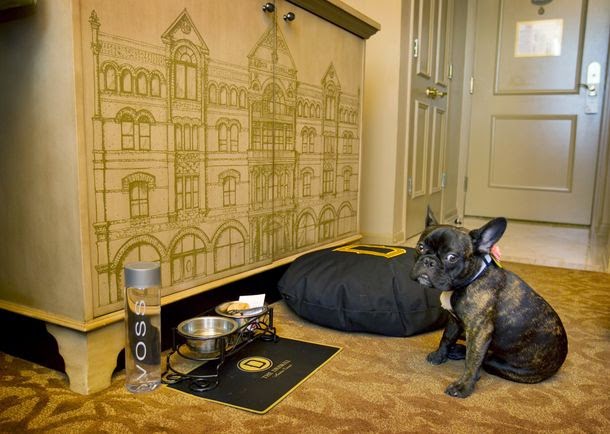 Jay Janner
Mimi, a six-month-old French bulldog, is in the lap of luxury in a hotel room at the Driskill Hotel on Thursday, August 2, 2012. Diane Miller of Houston brought her dog on her business trip to Austin, and took advantage of the Driskill's pampered pets program. The dog was treated to a custom pet bed, designer dishes and mat, bottled spring water, gourmet dog treats and a souvenir pet toy.
from: statesman.com
By Eric Webb
Happy National Pet Month: Here's some news to kick off May in a furry fashion. A list recently released by Amazon.com ranks the top 20 U.S. cities according to how much money they spend on pet-related merchandise, and Austin made the No. 8 spot. It is the only Texas city on the list.
Amazon's rankings, determined on a per capita basis, only count cities with more than 40,000 residents. Topping the list are Miami, Seattle, Atlanta. According to the news release, the most popular pet products sold on the site in 2013 included Cat Dancer 301 Cat Charmer Interactive Cat Toy, Kyjen Hide-A-Squirrel Puzzle Toy for Dogs and StarMark Clicker Dog Training System.
Austin's tendency to pamper its pets should come as no surprise. According to a 2013 American-Statesman story, Austin boasts 365 veterinarians (the highest number of vets per capita in the state). The city is crazy for canines, too, home to an estimated 193,600 dogs as of February 2013. (Anyone want to count the cats?)
In celebration of the good news, take your animal companion out to dinner tonight. We know you don't mind spending the money.
Posted by Debi Martin No comments: