A pile of dirt and a giant scooper are part of the city's Scoop the Poop campaign. The dirt represents the total amount of droppings in Austin in a day — 60,000 pounds, officials estimate.

at big pile of dirt on Auditorium Shores? Are you wondering what that's all about?

Well, it's part of a City of Austin campaign to get you to start picking up your dog's droppings.

"This is a pile of dirt," says the educational sign in front of the dirt pile, on the banks of Lady Bird Lake near the western end of Riverside Drive. "Imagine, if one day all the dog poop in the city were put in one big pile. It would be this big. It would weigh 60,000 lbs."

Really? That's the equivalent of a day's worth of Austin dog mess?

This 60,000-pound figure, Shay said, is based on the estimate of 120,000 dogs in Austin and the average weight of each daily dog bomb weighing a half-pound.

And the pile, she said, is five dump truck loads of dirt. "And they were big dump trucks."

But she said the estimate on the number of dogs in Austin might be a little low. So to be accurate, the pile perhaps should be bigger.

"It has to do with poop, and scooping the poop," said Shay, of the campaign. "We are trying to reduce the water bacteria we have in a few areas that have high enough bacteria to be a health concern. We're trying to keep it a little bit more fun and do our share to keep Austin weird."

How about that pile?

"For our year-old golden retriever, that's probably a week's worth of poop," said Matt Curtis, communications director for Leffingwell. "She's a big dog."

Shay said that the campaign spent $26,000 for a TV spot by a local company called Shiny Objects.

The 10-foot decorative trowel sculpture called the Scooper that stands in front of the dirt pile cost $3,500. It was made by an arts group called Austin Green Art. The dirt cost nearly $450. Signage cost about $400.

Then there was the $350 the city paid to local troubadour Woode Wood to perform a song for the dog poop cleanup campaign.

Wood was at the news conference Thursday singing the song to a group of about 50 people who showed up.

So how's that song go?

"On a sweet Austin night,

"with someone on all fours."

After the mayor got up and said a few words, Wood sang the song and got the mayor to sing along with him — sort of.

"Scoop it up," the mayor chimed in with absolutely no musical tone as Wood continued singing. Every so often where it fit, the mayor would interject another timely yet wooden "scoop it up."

During his brief speech, the mayor pointed out that dog poop can be damaging to the water and "can do a lot more than ruin a new pair of shoes."

But even if this campaign turns out to be a bust, you won't be able to blame the mayor. Instead of a dog, he has a cat.

John Kelso's column appears on Sundays, Tuesdays and Fridays. Contact him at 445-3606 or

From the Austin American-Statesman
Posted by Debi Martin No comments: Links to this post 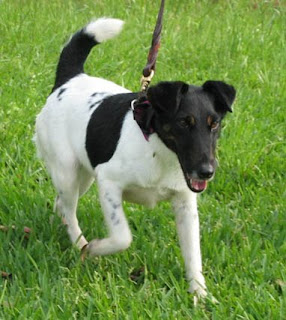 She is a young 9 year old smooth fox terrier. She is a retired champion and is a beautiful girl.

Jet is healthy, up to date on all vaccinations, is heartworm negative, is on heartworm and flea preventative, and is microchipped. She is a lovely, affectionate girl who wants nothing more than to be close to you and lay in your lap. This little girl really deserves a great home.

Jet is housetrained (doggy door) and gets along well with other dogs.

If you or someone you know may be interested in Jet, please email Julie at wftmomx2@yahoo.com ...please pass the word! This girl needs a home!
Posted by Debi Martin No comments: Links to this post

Now that the rain's stopped and it's not 100+ degrees outside, go take a hike -- with your dog

The folks at REI at 5th and Lamar will present tonight a one-hour how-to session on Hiking With Rover. Learn how to turn your dog into your favorite hiking companion! In this one-hour session we will cover topics like equipment, exercise, nutrition, trail safety and etiquette. For more info go to: http://www.keepingaustinfree.com/2009/09/hiking-with-rover.html

If you can't make it to REI tonight, pick up Best Hikes With Dogs: Texas Hill Country and Coast, by local author, journalist and native Texan, Melissa Gaskill, pictured (below left) with her dog.

Gaskill has spent more than 20 years hiking and camping with her dogs all over the Lonestar State. In this new guidebook, she shares her favorite hikes in the Hill Country and Coast areas that are sure to delight both you and your pet. The hikes range from short jaunts to longer, challenging trails. Discover everything from rugged hills with limestone cliffs and rolling terrain, to wide-open areas with brush and cactus, to the coastal plain with its grasslands and pine forests.

The Austin chapter of the Sierra Club wrote:
"Best Hikes with Dogs: Texas Hill Country and Gulf Coast is a great resource for dog owners and dog lovers who like to get their canine buddies out on the trails with them… Trail descriptions are excellent, with the trail(s) laid out carefully on a topo map overlay with trailheads, picnic tables, parking areas and campgrounds, if any, marked on the maps."
Posted by Debi Martin No comments: Links to this post

Paws in the Park rescheduled for Sept. 19 due to rain

Austin Dog Alliance Pwas in the Park and the Cirque du Pawrade has been moved from Sept. 12 to Sept. 19.

Posted by Debi Martin No comments: Links to this post