Best ever on pets lost and found and Katrina 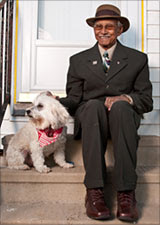 As Hurricane Katrina bore down on New Orleans, the mayor issued a last-minute order for everyone to evacuate. In the clamor to get out of the city, many pet owners left their animals with food and water, fully intending to return in a few days. People without the means to leave the city on their own were forced onto busses and barred from bringing the furriest family members along.

The result was that tens of thousands of domesticated pets were left in a devastated city. Those that survived the storm and the floods faced grim odds of surviving the heat without fresh water or enough food to last the weeks or months before their owners were permitted back into the city to rescue them. MINE follows some of the hundreds of volunteers who mobilized in the hours and days after the storm, entering the city and capturing as many stranded pets as they could find. These volunteers often provided life-saving medical care to the injured, dehydrated, and hungry animals. Massive temporary animal shelters sprung up in the suburbs of New Orleans, where the lucky pets who survived waited to be reunited with their owners or adopted out.

It would not be easy or quick, or without ethical quandaries and lawsuits. MINE tracks the stories of several of the rescued pets, their original owners, and their adopted families, raising questions about what constitutes pet “ownership” and how we regard animals as both family members and property.
Posted by Debi Martin