A Lover not a Fighter: Bomb-sniffing dog stationed in Afghanistan prefers to cuddle 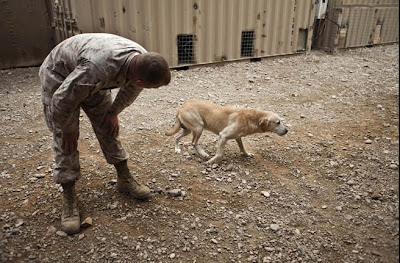 Out of the 58 bomb-sniffing dogs the Marines have in Afghanistan, only one—a brown-eyed, floppy-eared yellow Lab named Gunner—is suffering from such severe canine post-traumatic stress disorder that he had to sit out the ongoing offensive in central Helmand Province. 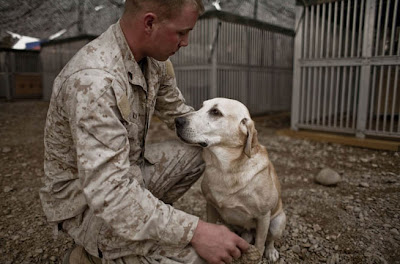 by Bryan Denton for The Wall Street Journal

Like their human comrades, some war dogs can handle combat, and some can't. One Marine Corps explosives dog, a black Lab named Daisy, has found 13 hidden bombs since arriving in Afghanistan in October. Zoom, another Lab, refused to associate with the Marines after seeing one serviceman shoot a feral Afghan dog. Only after weeks of retraining, hours of playing with a reindeer squeaky toy and a gusher of good-boy praise was Zoom willing to go back to work.

"With some Marines, PTSD can be from one terrible event, or a cumulative effect," says Maj. Rob McLellan, 33-year-old operations officer of the 2nd Combat Engineer Battalion, who trains duck-hunting dogs back home in Green Bay, Wis. Likewise, he says, the stress sometimes "weighs a dog down to the point where the dog just snaps."