Homeless country kitty sure could get used to life of luxury 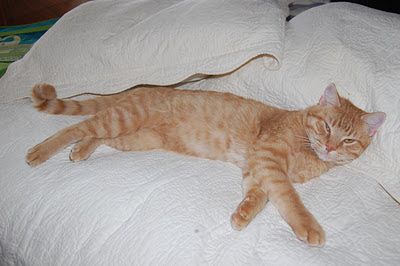 Kind-hearted animal lover and Driftwood resident Theresa Jones, found this possible Morris look-alike. He was neutered Oct 3, had his initial shots, and was negative on FLV. He is probably about 1.5 years old. He has his claws. She provided the following personality profile and info on him:

He is doing great. He seems very content indoors. I think he could be an indoor cat. Right now he is living in my guest room but tomorrow I'm moving him to my studio and he'll probably be an outdoor cat in a few days. He watches out the window some but hasn't shown a great desire to get outside.

He's a handsome boy. He likes to sleep on the bed, especially with someone. He loves to cuddle and rub faces. I weighed him today and he's about 9 pounds. I've exposed him to our dog. The dog was pretty excited about the cat but the cat's pretty mellow about the dog. The cat's pretty mellow about everything except food and getting his chin scratched.

He is a country boy (Driftwood) and would like a home where he can still go outside some away far from traffic (since he has no idea what traffic is).

He has yet to show any aggressive behavior. I think he would be a great family pet. He hasn't shown big concern about other cats (it's the resident cats who are the problem). I hate to have to send him outside but the current situation (him living in the back of the house) is not sustainable.

He is available immediately for adoption to the right home.