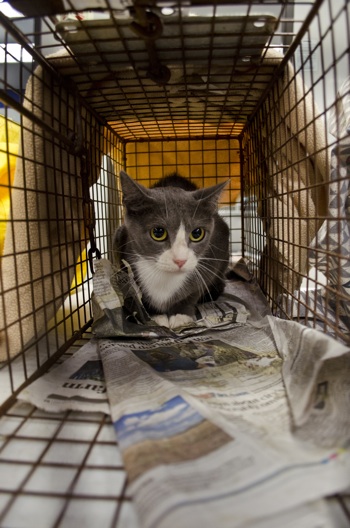 Austin has cats – a lot of cats. And in the absence of an ordinance that requires spay/neuter of pets, there are a lot of reproducing cats out there, many of them stray and/or feral. Year in and year out, the large free-roaming cat population remains a big problem in the city of Austin, local animal welfare advocates say.
And when you consider how quickly cats reproduce – they mate during warm months (so, you know, most of the year) and a female can become pregnant while still nursing – two cute strays can become dozens in short order.

In an effort to curb Austin's feral cat population, the Austin Humane Society has since 2007 operated a free Trap-Neuter-Return program. T-N-R is a volunteer-led effort to trap strays and ferals, get them to the AHS clinic to be fixed (dewormed, given shots, and to have one ear "tipped" so that they can be identified from afar as fixed) and then returned to the streets, where they often live in colonies – groups of cats that volunteers generally continue to feed and to tend to for years.
Although there's no "kitty census," as AHS Executive DirectorFrances Jonon puts it, the large number of cats that have come to the AHS T-N-R program over the last five years suggests how big the problem is: In 2007, the T-N-R program tended to more than 1,500 cats; the next year that number jumped to 5,000. Next month, the AHS clinic will mark it's 25,000th feral cat surgery. "The problem," says Jonon, "is massive."
Indeed, as the AHS program (which fixes dozens of cats every week) and its many volunteers, march forward, they're asking for your help. The AHS is looking for volunteers to help trap 150 feral cats from around the city and to bring them to the group's shelter on Wednesday, July 25, for a large-scale T-N-R spay/neuter event. (The shelter has humane traps that it lends out for exactly this purpose, and the AHS staff is ready to help you learn to use them so that you can get with the program.)

Want to help? Contact Leticia Stivers, the AHS' feral-feline-whisperer – officially, the feral cat program supervisor – at 512/685-0111 or 512/968-7131. Your feline friends – and the birds and lizards in your neighborhood – will thank you.
Posted by Debi Martin