The Purr-fect Photo: 6 Tips for Taking Pictures of Cats 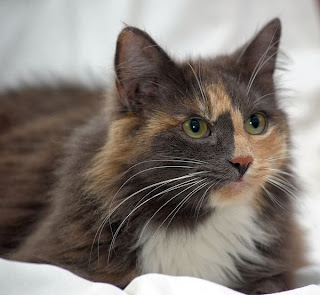 Our phones and cameras are filled to the brim with cat photos, but can we make those pictures even more purr-fect? The answer, of course, is yes!
Crafting these portraits is an art, and there are a few techniques that’ll make those images really stand out. These tricks will help you sneak some great snapshots, whether kitty is usually camera cooperative or needs a little coaxing. Scroll below for our tips...

1. Turn a play ession into a photo shoot.

The best way to capture an action shot? Start the action! Bring your camera and a toy near kitty, and try taking some mid-play pictures -- or, perhaps, mid-air pictures?

2. Be Stealthy about getting photos.

We’ve all been there -- your cat is curled up in the cutest position, and the sound of your footsteps suddenly jostles kitty awake. Frustrating for the owner who almost had a photo gem, but easy to get next time with a sneak attack!

Approach your cat as quietly as possible, having the camera ready so you won’t need to move it around a lot to set up the picture. If you have a zoom function, that’s even better -- you won’t get as close, so you likely won’t startle kitty as much.

You can also play the waiting game -- gently approaching your cat and propping the camera on a surface, simply waiting for the right moment to click a button. This takes a lot of patience, but could result in a great image.

3. Take photos on the cat's level.

Adding a cool perspective to a photograph can really make it pop, and getting on the cat’s level adds an artsy touch. Set the camera on the floor and take photos straight on -- you’ll likely get pictures with interesting angles that really capture the cat’s perspective. This approach can also be less obtrusive for kitty.

We’ve all seen the glowing yellow eyes that often come with using a flash, so have a different light source in mind to reduce the need for flashes. Regular room lights are great for eliminating glowing eyes, as is moving the light source higher and further from the camera.  Or, pick a spot that’s flooded with natural light so no artificial lights are needed at all.

As the star of your portrait, you really want kitty to stand out. It’ll make for an even prettier picture to make sure the background -- a couch, wall, blanket, or other backdrop -- isn’t too busy. This isn’t a must, but could really help enhance the beauty of the photograph.

6. Don't try to force the snapshot.

Kitties are most likely to cooperate for photos in a spot that’s comfortable to them, so those places are ripe for relaxed, candid pictures. Perhaps a perch near the window or a favorite chair? For a cat that’s not about to patiently pose, sometimes the photographer needs to be the patient one!


Definitely try lots of things out – different angles and backdrops can make for a variety of fun and unique photographs. But most importantly, any snapshot of your cat is sure to be adorable -- you can’t go wrong there!