Update: Texas vet who boasted about killing cat with bow and arrow found in violation by the Texas State Board of Veterinary Medical Examiners 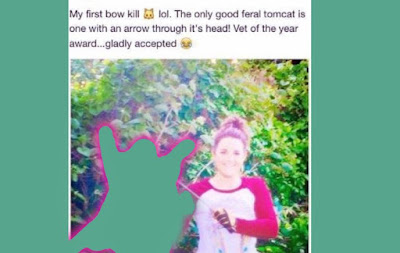 Dr. Kristen Lindsey lost her job as a veterinarian after killing a cat with a bow and arrow, then posing with the dead cat (covered up in the photo) in a Facebook post. (Photo: KBTX.com video)


AUSTIN — Kristen Lindsey, the Texas veterinarian who outraged many for boasting about killing a cat with a bow and arrow, has been found in violation by the Texas State Board of Veterinary Medical Examiners.

>>Read the original report
KXAN reports that what the violation is was not revealed at the meeting. More details, and punishment, if any, is expected to be announced in October.
Animal rights advocates were outraged when Lindsey posted a photo on Facebook of herself, smiling, while holding a dead cat with an arrow through its head. The caption on the since-deleted post read, “My first bow kill, LOL. The only good feral tomcat is one with an arrow through its head! Vet of the Year Award…gladly accepted.”

At the time of the controversial Facebook post, she was working at the Washington Animal Clinic in Brenham. She was fired in April.
In June, a grand jury declined to indict Lindsey on animal cruelty charges.
According to KXAN, Lindsey believed the cat was a stray and had rabies. She claimed she shot the cat to protect her own animals. Local residents say the cat, named Tiger, was not a stray, but belonged to an older couple in the neighborhood.

A Change.org petition demanding that her veterinary license be revoked has over 28,000 signatures.
Posted by Debi Martin

Email ThisBlogThis!Share to TwitterShare to FacebookShare to Pinterest
Labels: Texas vet who boasted about killing cat with bow and arrow