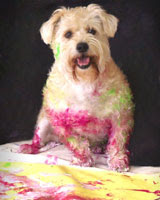 An annual evening of unleashed talent featuring canine and equine artistry, will benefit the programs and services of Animal Trustees of Austin.

Petcasso 2009 includes a lavish buffet dinner, silent auction and paintings created and presented by Austin animal artists and their owners for the live auction.

Petcasso 2009 is Animal Trustees of Austin's third annual animal art event to raise money for its programs providing quality and affordable health care for animals of low income and homeless residents of Austin. Petcasso 2008 raised more than $130,000 to support ATA's two clinics, with more than 85% of the proceeds going directly to serve animals in need.

The artist colony of Tidbit, Tucker, Ricky, Otis and Romeo (see photo, left) return this year. Tidbit is an adorable minurature dachshund, who loves her beauty sleep. She was just a "Tidbit" of a dog when guardians Gilbert Johnson and Tino Ramirez adopted her at ten weeks old. Tucker is strong yet sensitive as he guards the house. He was washed ashore after escaping from a puppy mill and swimming across the San Bernard River. His rescuers saw how tuckered out he was, hence the name "Tucker."

Miniature schnauzer Romeo (aka the dog of love) is a Hurricane Katrina rescue. He likes sitting outside, relaxing, and looking for wildlife. Ricky, aka "Tricky Ricky," is a beloved chihuahua and an ATA rescue dog. Ricky was there to create the new masterpiece but is no longer with us. The newest member of the pack is Otis, a miniature pincher. She got her name from trying to jump to the next floor like an "Otis" elevator. She loves jumping, running, and barking.
Posted by Debi Martin