KUT News report on APD Change in Canine Protocol: Cisco did not die in vain 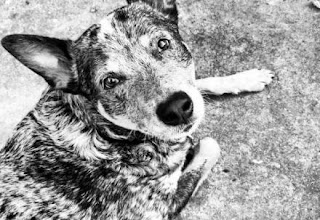 In Wake of Cisco the Dog Shooting, APD Announces Changes to Canine Protocol
By Wells Dunbar, KUT News
Photo by facebook.com/JusticeForCisco
After the controversial shooting of a pet dog named Cisco earlier this year, Austin Police are announcing training and policy changes to the use of lethal force on dogs.
Austin Police Department Chief of Staff  David Carter says the department is quickly implementing policy and training changes – in hopes an incident like the Cisco shooting doesn’t happen again.
“Before an officer takes action, there needs to be an imminent threat of bodily injury,” Carter says, “whereas in the past, it would describe that the animal was dangerous.” Additionally, officers would need to “justify the position of using a firearm, versus using some other method to repel a dog, if that’s necessary. For example using a nightstick, or chemical spray, or a tazer, or some other thing such as that.”  Additional responsibility now also falls on the officer’s supervisor to investigate such shootings, instead of having the officer self-report on the circumstances of the shooting.
For more click here.