Uggie from "The Artist" leaves his mark 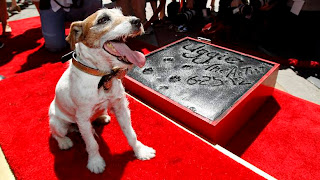 Uggie, the canine star of the Oscar-winning film The Artist, became the first dog to put its paw prints in cement outside the famous Grauman's Chinese Theatre in Hollywood.

The Jack Russell terrier was celebrated at a treat-laden ceremony outside the landmark as councillor Tom LaBonge declared it Uggie Day in Los Angeles.

"The main message that Uggie would like to send to everybody out there is to please adopt," Uggie's trainer, Omar Van Muller, told the crowd. "He's adopted. He made it. If you guys can adopt a dog, even if they don't make it on the big screen, they'll be big stars at your house."

Uggie, who arrived at Grauman's Chinese Theatre in a fire engine, was bestowed with a golden bow-tie collar and given a cake in the shape of a fire hydrant after performing tricks for photographers and tourists lining a red carpet.