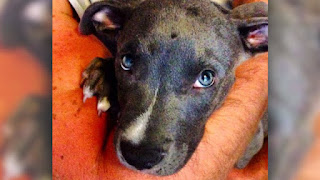 "Who would take a dog?" That's what Jordan Quick is trying to figure out. "People comment about him all he time, he's a cute puppy and there aren't any other puppies around here," says Quick's girlfriend Jamie Higuera of the blue nose pit bull.
Quick says he left his North Austin apartment early Saturday morning. When he got home around 1, he says he noticed his XBox was missing. So was his beloved Jax. "I feel violated and insanely upset that someone came into my room, my place and took my dog."
Quick believes the suspect was driving a white F150 truck. Images were captured on his neighbor's surveillance camera. He says he isn't sure if the door was unlocked or picked but that there were no signs of forced entry, "I don't know what could have happened."
Also on Saturday morning, Ken Paulsen was driving down 183S on his way to workout. He was behind a white pick-up, when he saw a dog's head pop out of the back. "I don't know if it hit a bump or jumped but it tumbled on to the highway at 60 miles an hour," Paulsen says.
A dog owner himself, Paulsen scooped Jax up. "I assumed the owner was the truck driver and was reckless by keeping him in the truck bed." With no tags or a collar, Paulsen took the injured dog to his vet. "He very obviously had road rash all over from hitting the asphalt, you could visibly see one of his ribs was dislocated."
And he needed pelvic surgery. After spending more than $400 of their own money, Ken and his wife Emily started aGoFundMe campaign to pay for it. "I know how devastating medical expenses can be to folks I feel like we're in a position to help," he says. Emily adds, "The fact that somebody could do that to a puppy, the cruelty that's there, it's hard for us to fathom."
At the same time, Jordan and Jamie had started a Facebook page to find Jax.
"Because we started that," say Emily, "some of our friends connected the dots from the owner's lost dog page." And Jax and Jordan were reunited on Monday. "It was definitely an eye opener to what social media can do," Jordan says. And he says he's blown away by the kindness of the two strangers who took care of his dog, "I feel eternally grateful, these people saved my dog."
Jax still needs the surgery. And before he and Jordan were reunited, Ken and Emily say their friends kicked in to help. Now Jordan's are too. He says, "Our friends and family know now that he's been found, they've contributed and sent in money and are tying to help him out, we're thankful and grateful."
The suspect though is still on the loose, and the Williamson County Sheriff's Office is asking anyone with information to come forward. "Of all things he could have taken my DVD's, pictures, posters, surround system, TV, I don't care," Jordan says angrily. "He took my dog and that's unforgivable."
He says though he can sleep soundly tonight knowing Jax is in his arms. "I guarantee you that we'll try to be more charitable."
Emily and Ken say they were just doing what they hope most people would do, "To find out this poor person to have their family member stolen, I can't imagine how we would feel if one of our guys disappeared, it would be devastating."  Emily adds, "Today's been so overwhelming in the joy and goodness in finding his owner, we never imagined it would end this way."
Posted by Debi Martin