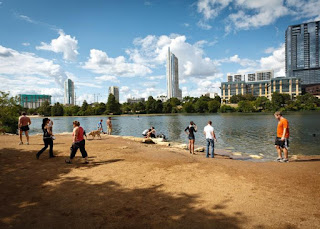 from: austinmonitor.com
by Tyler Whitson

Amid concerns that Fun Fun Fun Fest would not take place this November at Vic Mathias Shores, City Council has intervened in negotiations between festival organizers and the city’s Parks and Recreation Department to ensure that it goes forward as planned.
Council unanimously passed a resolution Thursday directing Parks and Recreation Department staff to allow organizer Transmission Events to use up to 1 acre of a newly renovated off-leash dog park to accommodate the event, which will take place Nov. 6-8.
The resolution also ensures that the rest of the 3.5-acre dog park will remain open for public use during the festival. It is adjacent to the Ann and Roy Butler Hike and Bike Trail and west of the event space and an additional multipurpose “flex” space that the festival will be using.
The Austin Monitor first reported in June concerns over the use of the off-leash dog park by the annual festival.
Council Member Greg Casar, who sponsored the resolution, made it abundantly clear that the directive applies only to this specific situation and is not a long-term solution.
“The present resolution is about helping to fix the short-term issues faced by all these events, the trail users and the neighborhood,” Casar said.
The events that Casar was referring to are the 40th annual Settlement Home for Children Charity Garage and Estate Sale, which will take place Nov. 5-8 at the Palmer Events Center, and the Austin Opera rendition of Verdi’s Aida, which will take place Nov. 7 at the Long Center for the Performing Arts.
Representatives from both events raised concerns over the past few weeks that the festival, if not properly set up and reigned in, would negatively impact their events by creating noise, odor, congestion and parking issues.
Marilyn Wilson, development director for the settlement home, and Jon Nash, president of the Austin Opera board of trustees, publicly expressed support for the resolution as a temporary fix, however, as it gives festival organizers more flexibility to move their equipment farther away from the other venues and sets other requirements for the event to follow.
These requirements include limiting street closures during the festival so that they don’t interfere with the other events.
“We need a short-term solution, which is why we are here in support of the efforts of Council Member Casar,” Wilson said. “I have to say, if we had it our way, the resolution would address the need for a long-term solution in which multiple events occurring in the same space, using the same facilities, would have been addressed.”
Though the resolution itself is not a long-term solution, it does direct city staff to begin reviewing the way that the Parks department, the Long Center and the Palmer Events Center coordinate their annual event schedules. “The Council desires that procedures involve early planning and communication among various stakeholders to best avoid conflicts between major events,” it reads.
These stakeholders include event organizers, neighborhood groups and others.
Proposing solutions for this specific issue next year and other issues related to large events on city parkland will be the responsibility of the city’s new Parkland Events Task Force, which will meet for the first time on Aug. 25.
In the meantime, Council Member Sheri Gallo said that Parks staff should not make any decisions about next year’s Fun Fun Fun Fest without consulting Council.
Transmission Events General Manager Bobby Garza told the Monitor that he has not yet begun to work out the venue details for next year’s festival.
Bouldin Creek Neighborhood Association spokesperson Catie Mohin explained in an email to the Monitor on Thursday that her group is looking forward to a long-term solution.
“We know this is viewed as a one time fix given that the new Parkland (Events) Task Force will meet soon,” Mohin wrote. “Regardless, our focus is on setting clear guidelines so that this sort of issue is dealt with by clear rules in the future.”
Rendering of Vic Mathias Shores courtesy of the Parks and Recreation Department.
‹ Return to Today's Headlines
Read latest Whispers ›
27  1  163

KEY PLAYERS & TOPICS IN THIS ARTICLE

Austin City Council: The Austin City Council is the body with legislative purview over the City of Austin. It offers policy direction, while the office of the City Manager implements administrative actions based on those policies. Until 2012, the body contained seven members, including the city's Mayor, all elected at-large. In 2012, City of Austin residents voted to change that system and now 10 members of the Council are elected based on geographic districts. The Mayor continues to be elected at-large.
City of Austin Parks and Recreation Department: The city department responsible for the city's park system, rec centers, and associated infrastructure.
Transmission Events: The organization behind Fun Fun Fun Fest and bookings for Mohawk, among other things.
- See more at: http://www.austinmonitor.com/stories/2015/08/council-reaches-fun-fun-fun-fest-compromise/#sthash.smmiJuFc.dpuf
Posted by Debi Martin