Blackie is pictured in his new home with foster parent Brunie Drummond.


Blackie, a 14-year-old blind dog, was days away from death when an Austin, Texas, animal shelter volunteer took him home.
His previous owners had brought him to the shelter when "they could no longer take care of him. Blackie had been an outdoor dog his entire life and he had never seen a vet," Kristen Auerbach, deputy chief animal services officer at Austin Animal Services, told ABC News. "The owners brought him in anticipating we would perform end-of-life euthanasia." 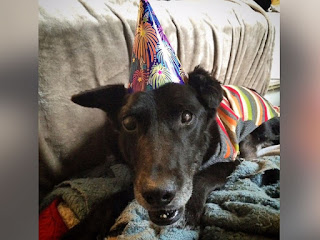 Blackie arrived with various health problems, including blindness from untreated Glaucomaand cataracts. He also had a large lump, presumably a tumor, on his chest.
Euthanasia was considered for Blackie but then "a holiday miracle occurred," said Auerbach.
Volunteer Brunie Drumond heard Blackie's story and decided to take him in to live out his final days. Drumond is also a volunteer at Austin Pets Alive! where she took Blackie for medical evaluation.
And then something interesting happened to Blackie. Though blind, he began following Drumond around by the sound of her voice, when previously he had struggled to walk.


"He seemed to take on a new life, loving every second of being a pet dog, surrounded by people and animals who loved him," said Auerbach.
Blackie celebrated his first Christmas in a home and even got a few Christmas presents. He'll ring in the new year cuddled up with Drumond on the couch -- his favorite place -- and the two will watch the ball drop together.
"In every animal shelter around the nation, there are senior and special needs pets waiting for a special family to come and save their life," Dr. Ellen Jefferson, the executive director of Austin Pets Alive!, told ABC News.
"Fostering or adopting a pet nearing the end of its life is one of the most rewarding experiences you will ever have. You will never come across a more grateful creature to be saved than a grey-muzzled cat or dog," she said.
"We don't know how long Blackie has to live, but we do know that he will never spend another night outdoors, cold and alone," Auerbach wrote in a Facebook post. "We know he'll get only the best love and care from Brunie while he is with us and most importantly, we know when Blackie passes away, he will be surrounded by people and animals who love him and who, at the very end, showed him what it's like to be a part of a family."