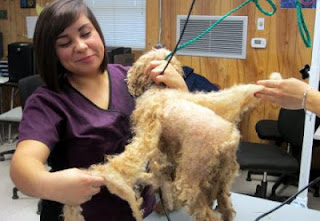 The Veterinary Clinic Inside an Austin High School

With so many care options for the four-legged family members, how do you determine where to take yours for a check-up? There are high-end pet spas, plain vet clinics and everything in between. And still, there is a new player in the nearly saturated market.
One of the dogs at this clinic is Frida. She is blonde, tall and beautiful. But, according to her doctor’s report delivered by Mr. John, Frida has some weight problems.
“Your dog is weighing 69.9 lbs and she needs to be around 60 to 65,” says Mr. John, the high school teacher who runs the pet clinic at Akins High School. He is sure to ease the concerns of Frida’s owner. So he continues by saying that by no means is she “obese”.
Eric John is the Agriculture Science instructor at Akins High School. He says “the program has been in existence since 2005. [But], the clinic has just recently opened up this year. [And], it’s open for everybody” 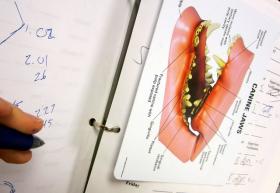 Enlarge image
Credit Joy Diaz, KUT News
Students have the support of their notes, their teacher and volunteer Veterinarian Dr. Colt Dietz.
At the clinic, eight Akins seniors do all the work. A couple of girls can be seen washing a fawn pug, two more are trimming off the matted curls of a trembling puppy. Earlier in the day, each administered shots. All the work is done under the supervision of Mr. John and volunteer Veterinarian Doctor Colt Dietz.
But the doctor doesn’t only supervise, he instructs. As he moves his stethoscope around a Chihuaha’s chest, Dr. Dietz shows students how to listen for abnormalities in dog’s heartbeat: “you can slide [the stethoscope] up a little and listen to the atrial and the pulmonary and then on the right side the tracheal will be about right there” he says while touching each rib bone.
The animals around the clinic are calm and quiet. The students invested.  Mr. John says he started this intense program with 40 kids. From the time these kids were freshmen, they’ve been learning about ways to deal with animal’s body fluids and how to manage their pain.
As their high school years have advanced, the students have learned how to assist in surgery. And even how to put an animal down. Many students got discouraged throughout the years, but eight are still in the program. Vanessa Preciado will graduate this spring with a Vet Tech Certificate.
She says one thing she still struggles with is watching pet owners suffer. Preciado remembers a recent experience where “there was a guy who had spent two hours holding his dead dog. It was his family,” she says “he had him since he was younger.” Preciado says to make things easier, they “give [the owners] paw prints and their [pet’s] ashes if they want them,” because it is just as important “to comfort the humans as well as the animals.”
Even though there’s no shortage of veterinarians around the country, these students want to join the profession. Akins students could be well on their way, they’re already getting the same experience college students don’t get until their third or fourth year.