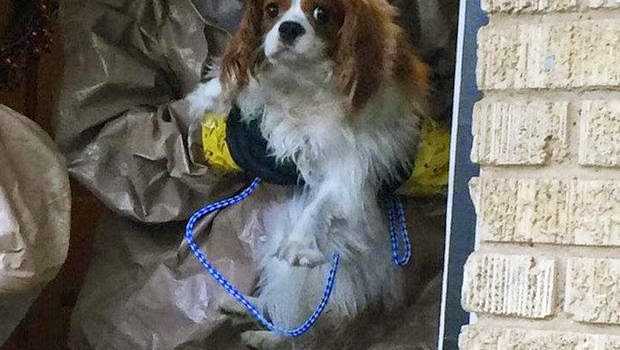 DALLAS - Officials say the year-old King Charles Spaniel belonging to the Dallas nurse hospitalized with Ebola has been given comfortable bedding, toys and other items to entertain him while he stays at a decommissioned naval air base.
City spokeswoman Sana Syed said Tuesday that Bentley is staying in the former residence of the executive officer at the decommissioned Hensley Field, which is owned by the city. Bentley was moved Monday from nurse Nina Pham's apartmentto his new home, where he'll be monitored.
The nurse watched pictures and video of Bentley being moved into quarantine. Her family says Pham was happy to learn "Bentley" is doing fine.


Dallas Mayor Mike Rawlings says city officials vowed to do everything in their power to care for Pham's beloved pet.
There was an uproar in Spain after Madrid authorities euthanized a dog named Excalibur that belonged to a nursing assistant sickened by the Ebola virus. She remains hospitalized. Authorities were concerned the dog might be harboring the virus.
Dr. Thomas Frieden, director of the U.S. Centers for Disease Control and Prevention, said at least one major study indicated dogs could spread Ebola.
"Researchers tested dogs during the 2001-02 Ebola outbreak in Gabon after seeing some of them eating infected dead animals," Frieden said. "Of the 337 dogs from various towns and villages, 9 to 25 percent showed antibodies to Ebola, a sign they were infected or exposed to the virus."
The risk that dogs might spread Ebola is very small in the U.S. or other places where dogs aren't near corpses or eating infected animals, said Sharon Curtis Granskog, a spokeswoman for the American Veterinary Medical Association.