Texas Humane Legislation Network: Go to the polls for animals 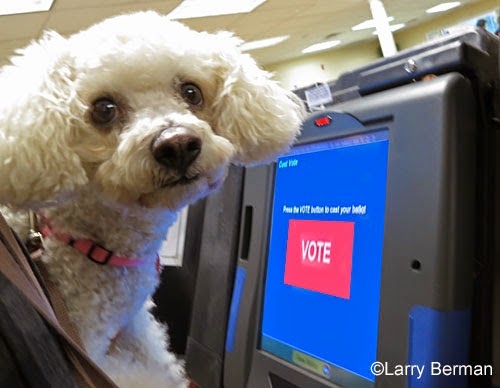 She can't vote, so please make sure you do! Photo by Larry Berman.

If you haven't already voted, be sure you get out and vote on Tuesday November 4th! Candidates who care about protecting animals against abuse and cruelty need your vote so that they in turn can pass humane legislation. Without the efforts of humane legislators in Texas, we would have none of the following laws:

Horse Slaughter: Humane legislators time and again have had to defend Texas' horses against those who wish to process horses and ship the meat abroad.

Cockfighting:  Cockfighting, once defended as a sport, is now illegal in Texas.

Horse Tripping: Without this law, it would be legal to rope or trip a horse at full gallop. Horse tripping is horrifically cruel and leads to severe injuries and death.

Pet Evacuation Bill: In the wake of Hurricanes Katrina and Rita, legislators recognized that people consider pets to be family and would stay in harm's way rather than abandon their animals.

The Puppy Mill Law: Also known as the large scale commercial breeders act, without this law, there would be no inspection or regulation of large scale pet breeders in Texas.
Use of the Gas Chamber as a Method of Euthanasia in Shelters: In 2013,legislators voted unanimously to stop the use of carbon monoxide gas to euthanize pets in Texas Shelters.

You can check to see if a candidate in your district received our endorsement by clicking here. Click here to find your polling station.