To your cat you are a huge unpredictable ape 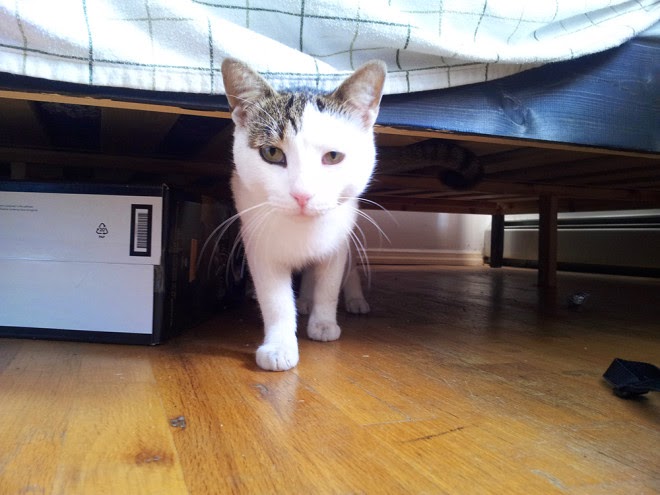 from: www.wired.com
BY NICK STOCKTON

Shingles isn’t my condition; he’s my cat. I love him like crazy, but he gets under my skin.
I’m not alone as a conflicted cat fancier. Tony Buffington is a veterinarian at Ohio State University, and he recently told me many cat owners are constantly frustrated by their feline companions. Even though we feed them, clean up after them, and pet, hug, and hold them, Buffington says that few of us know how to listen to our cats. This can make things more frustrating for them than for us. That’s because no matter how much we love them, cats are our captives, domesticated aliens with no way of explaining their customs, or of interpreting ours.
Dr. Buffington (a great name for your next kitten, by the way) sat down with me to explain how to listen to cats. These aren’t just tricks to score more cuddle time, but ways to create a more harmonious home that could improve your cat’s health. For years, he’s been studying the root causes of interstitial cystitis, a painful and chronic inflammation of feline bladder tissue. His research indicates a stressful home environment may cause the condition, and perhaps other chronic cat diseases as well. He believes the best cure is learning to listen to your cat, giving him choices, and reducing the environmental factors that trigger his stress response.
You are a huge, unpredictable ape
You hear the unmistakable sound of claws on couch. You snap, shout, squirt water, and maybe even throw a pillow. It’s all futile, because eventually he’s at it again. Your cat isn’t ignoring you, Buffington says. He just doesn’t know how to connect your negative reinforcement with his behavior. This is because cats evolved as solitary hunters with little need for reading social cues, especially those for behavior modification.
“How the hell is your cat supposed to know that you’re yelling at him because you want him to stop scratching the couch?” Buffington says. Without the cognitive ability to connect your outburst to their scratching, cats see only chaotic aggression. “To the cat, you’re this crazy primate who is attacking him for no reason,” he says.
Instead of discouraging the act, you become an object of fear. What’s more, your cat becomes frustrated, and eventually stressed, because you constantly interrupt natural feline activities like raking his claws or jumping on something high. “Cats get sick when they want to express their natural behaviors and they can’t,” he said, and will continue to do the thing when you aren’t around.
“The way to train a cat is through their environment,” Buffington said. For example, put two-sided tape on the corner of your couch, or tinfoil on the kitchen counter. Then, put the now-more-attractive alternative nearby: A scratching post covered with catnip, or the awesome cat tree you built from scavenged driftwood. When your cat does the thing you want her do to, reward her with a treat, or affection. “You let the house provide the negative reinforcement, while you provide the positive reinforcement,” Buffington said.
Feline feng shui
In those few hours each day where he isn’t sleeping, your cat is a little bundle of energy that wants to move through your home as harmoniously as possible. But you’ve disrupted his flow by placing the food dish next to the refrigerator, the litter box by the dryer, and his favorite cardboard box alongside the sliding glass door leading to the yard.
You might be deaf to the fridge fan or the spin cycle. But Buffington says it sounds like a monster growling at them while they eat or poop. Put the dish and the litter box in quiet, calm places where kitty has an escape route if he feels threatened (i.e., not in a closet).
Sights also can be stressful. Cats are curious about other animals, but if there is no visual barrier between the dogs, cats, goats, horses, or alpacas outside, the cat will feel threatened. “Cats don’t understand glass, but they do understand height,” Buffington says. Give your cat access to high places, like a cat tree or bookshelf, where she can observe in peace.
Leave Fluffy’s tummy alone
Sights and sounds aren’t the only things in your house that assault your cat’s senses. Humans are much more touchy-feely than cats, and we sometimes find their fluffiness irresistible. But cats, like us, want some say in how they’re handled. “Would you appreciate it if someone was always picking you up, hugging you, rubbing you?” Buffington says.
The best bet is to let Fluffy guide the interaction. If she’s rubbing some part of her body against you, she’s given you permission to pet that part of her. You touched her no-no place.

Steve Hardy/Flickr
Other feline behaviors are tricky, because they appear to be an invitation for petting. The classic is when Fluffy exposes her belly. When you go in for a rub, she bites and scratches you. “Exposing her belly is not a trap the cat is setting,” Buffington says. “The cat is biting you because they feel violated and afraid.” A cat’s belly is its most vulnerable body part, and exposing it is the cat letting you know she trusts you—not that she wants a belly rub.
That’s not the only place that’s off limits. Have you ever been petting your cat and all of a sudden she slinks off to the other side of the room, cowers behind something, and stares at you?
“If your cat is acting weird, then something probably triggered this behavior,” Buffington says. Perhaps you kept petting the base of her tail, because she kept raising her butt. This area is filled with nerves, and being pet there can be overstimulating, much like being tickled is to us. Also, being cradled is not normal for cats. If your cat is curled up in your lap, it’s not necessarily an invitation to be picked up.
What’s that? Your cat is totally fine with you picking her up, snuggling her, and rubbing her angel-soft belly? That’s fine. Nobody’s jealous. Just stop talking about it.
You want your cats to be friends more than they do
Shingles and I recently moved into a house with two other cats, and my roommate and I have been trying for months to get them to play. It hasn’t been going well. Time and again, we put them in the living room and watch as mild curiosity turns into panic and fighting. Did we just become best friends?

Jetske/Flickr
Buffington says we’re doing this all wrong. Start slow, he says, by rubbing each cat in turn with the same dry towel to get them used to each others’ scent. Before introducing them, make sure each cat has eaten, pooped, and received affection from their respective owners. In other words, ensure they are comfortable. Once the cats are together, let your cat know you have its back by giving it lots of affection. Don’t pressure them to mingle, and make sure each has an unimpeded escape route.
And if your cat isn’t feeling the play date and decides to bail, let him go. Buffington says one of our biggest misconceptions is that cats need to be around other cats. In the wild, cats hunt alone, and they don’t share. Other cats aren’t friends; they’re competition.
Your cat cares about you
Your cat is not as indifferent about you as she may seem. She wants to bond, and the best way to do so are with petting, food, and play. If your cat doesn’t like to play, you might be doing it wrong. If you’re using a laser pointer, don’t wave it like you’re at a rave. Move it at natural speeds and let the cat catch it occasionally. The same rule applies with the feather-on-a-string toy.
Shingles used to cry incessantly whenever I left for the day, and I worried that leaving him home alone was making him neurotic. Buffington suggests I create little rituals for coming and going. “Before you leave, you can call to the cat, give him some affection and let him know you are saying good bye,” Buffington says. And he says to have a similar ritual for coming home. “Some married couples survive on less than an hour a day of contact. Your relationship with your cat can survive on 10 minutes a day, as long as it’s really quality,” Buffington says.

Email ThisBlogThis!Share to TwitterShare to FacebookShare to Pinterest
Labels: Cat cognition, making your cat feel at home in your house