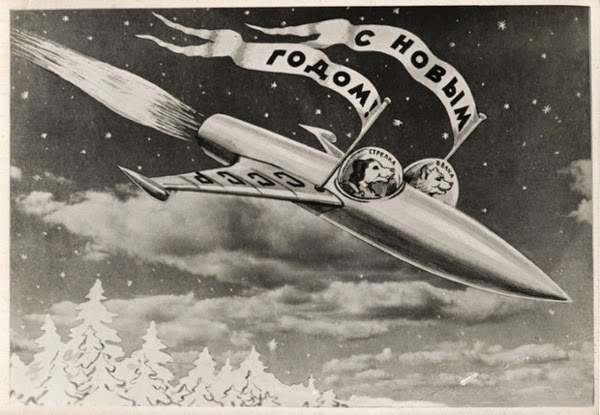 
Sixty years after the United States and the USSR faced off in the early days of the space race, it's not hard to find people who know about the dogs who were the first Soviet cosmonauts. Americans and younger Russians may not know the name of Laika, the first dog to become a space hero, but the idea of dogs in space has a strong pop cultural resonance all these decades later. Just this summer, the blockbuster Guardians of the Galaxy gave a tip of the hat to the canine cosmonauts by including one as part of Benicio Del Toro's collection of strange and unique items from throughout the galaxy.
But a few decades ago, Laika and the dogs that followed her were genuine heroes in Soviet culture, with a lot more exposure than a few seconds on screen. A new book called Soviet Space Dogs puts that history on display. Even if it's a little kitschy, it's beautiful stuff. For a while, Laika and her fellow cosmonauts were being put on anything that had a surface: Matchboxes, postcards, porcelain figurines, postage stamps, and badges bore the images of the heroic pooches who first explored space in the name of the USSR.
"We were really struck by the utter surrealism of these images when we first saw them," said Damon Murray, the publisher behind the new book. "It's more fantastical than the wildest science-fiction comics. You couldn't come up with this stuff if you tried."

Toy packaging with Laika's image on it, happily orbiting the earth.
The images seem even more surreal if you know the story behind the space dogs. Compared with the reality, the dog who wound up as part of Del Toro's collection inGuardians of the Galaxy had it easy. For one thing, he lived.

Laika on a 1957 matchbook.
When Laika went into orbit, the Soviet government announced that she had died four days into her journey, thanks to a malfunctioning battery in the capsule. The truth was even more heartbreaking: She died only a few hours into the launch, a fact that wasn't revealed until 2002. In all the pictures, Laika seems to be staring nobly at the horizon or at the unlimited span of stars above her, imagining new vistas of the future. But for Laika, there was no future. She hadn't really had much of a past, either. A stray for all her life, she was brought off the street specifically for the space program. Her humble roots only made her a more attractive subject for Soviet propaganda.

Laika with three Sputniks behind her.
In a 2012 Dogster piece, Charles Charj wrote movingly about the gulf between the myth and reality of Laika:
We can honor Laika with plaques and cigarette brands and postage stamps and 900-word tributes for online magazines (guilty!). But none of these things has anything to do with her. This busywork is all about us, these prizes and literal effigies (smoke 'em if you got 'em!). And what are we commemorating? Our own flawed image of ourselves: more noble and ultimately less true than the drawing of Laika on a pack of smokes. What should Laika mean to us? To be human is not the same as being humane.
Though we try, despite ourselves. Vladimir Yazdovsky, founder of Soviet space biomedicine, later wrote about the four weeks that elapsed between finding Laika and her launch into space. Days before Sputnik 2 blasted off, he brought Laika home to play with his children. This is likely the only time in her three years of life that she got to experience the pleasures and comforts of family and human benevolence. "Laika was quiet and charming," he said. “I wanted to do something nice for her. She had so little time left to live."

Belka and Strelka cheerfully zooming through the sky.
The next two dogs Belka and Strelka, had more of a future. In 1960, they went up in Sputnik 5, along with a gray rabbit, 42 mice, two rats, and assorted plants and flies. Belka, Strelka, and their companions had the distinction of being the first living creatures to go into orbit and come back alive. Not only did they get to live, but they became huge media stars. The Soviet government did a live broadcast of the dogs tumbling through zero-g, and after the flight, they were sent on tours around the country to meet their adoring fans. Strelka gave birth to six puppies, one of which was presented to Caroline Kennedy by Nikita Kruschev. But here again, the reality was darker than the official version. The original team for that flight died on the launchpad a month before, when their rocket exploded.

An image of Belka and Strelka from their first press conference.

A heroic worker shows off Belka and Strelka in their spaceship.

The poster for Belka and Strelka: Star Dogs.
Belka and Strelka continue to have a certain degree of celebrity even today. A memorial statue of the two dogs is planned for the site of the factory where their spacesuits were made. In 2010, an animated feature film titledBelka and Strelka: Star Dogs was released in Russia.
The cosmonaut dogs may be remembered fondly by many, but it's with a bitter taste. Laika, after all, was never supposed to return to Earth. In 1998, one of the Soviet scientists expressed regret.
"The more time passes, the more I'm sorry about it," Oleg Gazeno said. "We did not learn enough from the mission to justify the death of the dog." The images collected inSoviet Space Dogs are fascinating and beautiful, but they're only one side of the story.


Via The Guardian and CNN
Posted by Debi Martin