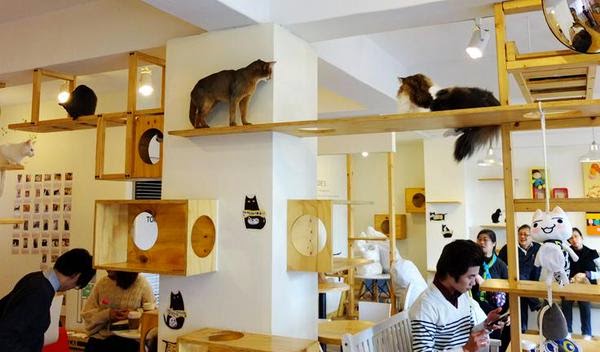 
Odam  wrote about the possibility of a cat cafe coming to Austin.


Since then, Austinite Rebecca Gray, the cat lover behind the idea, drive
a pedicab during South by Southwest, sold T-shirts on the street and
started a Kickstarter campaign to raise money.
As of this week, she has reached her Kickstarter’s base financial goals,
making Austin cat lovers’ dreams that much more real.
Scheduled to open in late 2015, the Blue Cat Café will be a place for rescue
cats to live, hang out with cafe visitors in need of a “kitty fix” and wait to
be adopted.
Due to food safety regulations that prohibit food from being prepared in
the same space as a cat living area, Gray said she is planning to partner
with multiple food vendors and host food trucks on the Blue Cat
Café’s patio.
Gray has already reached out to vegan burger truck Arlo’s, currently on
Red River Street. She will continue to look for more vegan options
because, according to the Kickstarter, the Blue Cat Café is “all about
animal care and promotion of their well-being.”
“I hope the Blue Cat Café is something that makes Austin proud
and that it is everything a cat cafe can be in Austin,” Gray said.
The idea of a cat cafe isn’t a new one; Gray points to Cat Town
in Oakland, Calif., as being an inspiration.
The Kickstarter has reached its $60,000 goal but
will remain open to donations until Saturday.
Posted by Debi Martin